This is a list of unnamed voiced characters in Littlest Pet Shop: A World of Our Own organized by either occupation, species, or episode.

The walrus (voiced by Vincent Tong) first appears in Pet, Peeved. He tells Edie that he doesn't enjoy being mocked.

In The Imitation Game, the walrus is seen alongside a parrot laughing at Quincy's Captain Gilturtle impression.

The carnival workers, which work at the Paw-Tucket Carnival and are primarily ferrets, appear only in The Wheel Deal. Of an implied many workers at the carnival, three ferrets are given on-screen dialogue.

The first on-screen worker, voiced by Vincent Tong (and ambiguously called "Ferret Carnival Worker" in the episode credits), informs Trip that he's too small to go on the rides.

The ride operator (again voiced by Tong) tells Bev and Roxie what's wrong with the broken ride, before going on break.

The booth worker (voiced by Kyle Rideout) orders Petula and Sweetie to go to the back of the line.

The vendor (voiced by Travis Turner), while not visible on-screen, offers to pets hot buttered kibble and "kennel corn." 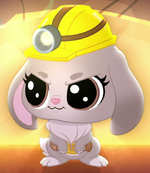 The construction rabbit (voiced by Ian Hanlin) appears in In the Steal of the Night to warn Roxie and Jade that they had entered a construction site, and that only "borrowing rodents" are allowed, but tells them a way to get out.

He appears again with another rabbit in The Eyes and Ears of Paw-Tucket, telling Roxie that they are digging a giant hole to make a giant water fountain. 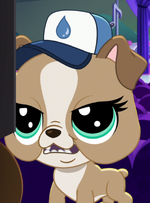 The bulldog janitor (voiced by Ryan Beil) appeared in Pitch Im-Purr-Fect. He interrupts Edie, Roxie, and Manny's rehearsal in the amphitheater to test the smoke, flea, bird light, and mic detectors, causing the trio to move rehearsal. 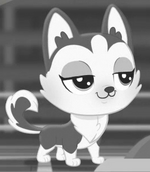 The husky (voiced by Diana Kaarina) appearing in The Big Sleep-Over stars in the spoof horror film, "Demon Vacuum 3: The Suctioning," as a minor character. 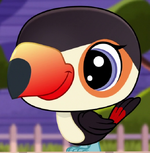 The toucan (voiced by Doron Bell) tells Roxie that someone told him she was looking for Tick-Tock. He tells her that Clicks picked the toy up. 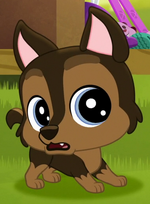 The german shepherd (voiced by Andrew Francis) is seen in the toy swap lifting a Trip-containing box. Frightened at the sight, he runs off. He is later seen fighting Austin over Tick-Tock. 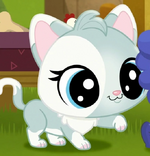 The kitten (voiced by Rhona Rees) takes Tick-Tock before an exhausted Roxie can. She voices her love for the toy to an audience of Jade and Roxie. 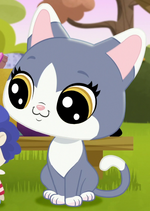 The kitten's mom is unvoiced and seen beside her daughter. 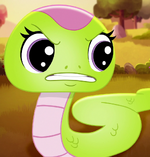 The snake (voiced by Diana Kaarina) is stepped on accidently by Austin as he trains for the agility race. 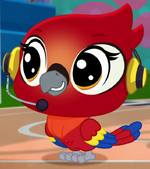 The parrot (voiced by Vincent Tong) tells Trip that Roget won the agility race by a mile.

The parrot (also voiced by Tong) is also seen alongside the walrus laughing at Quincy's joke. 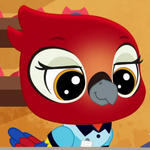 The parrot (actor not credited) works at a counter of the bowling alley, and attempts to serve Daisy her bowling shoes.

In CEO Trip, she is heard during Trip's presentation annoucing that the camera is recording. 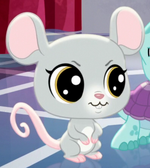 The security mouse (voiced by Richard Ian Cox) first appears in Slow Your Beau when Wisteria calls for security when Bev calls Beau out.

In Copycats, Copy-Dogs & Copy-Iguanas, he is seen guarding the waiting line at the nocturnal club and approving Jade's scarf.

In So Trip Thinks He Can Dance, he is seen helping Trip set up his live show. He is then seen rejecting Bev and the pets when they request to see Trip's performance.

He appears again in Biggest Fan, guarding the entrance to Savannah's air ship.

The food truck lizard (voiced by Lili Beaudoin) appears in Bev on the Edge, providing Trip with his cucumber crisps.

In Crystal Fever, she makes a cameo driving the food truck, with a hamster on a wheel powering it.

The dalmatian (voiced by Richard Ian Cox) appears in Bev on the Edge, making a joke to Jade in the gym while lifting weights.

"The Call of the Mild"

The shark salesman (voiced by Vincent Tong) is seen in a commercial advertising the Automatic Bone Burier.

Trip brings out his talking backup phone (voiced by Diana Kaarina) when him and the pets are lost. It has a GPS, a compass, a flashlight, and AI. 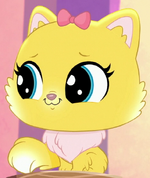 The yellow cat (actress not credited) appears in Four Left Feet brushing Tallulah's fur, as she tells her to stick with the curls.

The Russian blue cat (voiced by Shannon Chan-Kent) has appeared in many episodes, and made her debut in the Manny About Town short.

Her first appearance in the main show was in Four Left Feet, where she confesses that she pretends to be a finicky eater so that her owner thinks she is classy.

She is seen near the entrance of the nocturnal club in Copycats, Copy-Dogs & Copy-Iguanas. In So Trip Thinks He Can Dance, she is seen laughing at Trip. She also appears numerous times in The Incredible Roman and Ray as a member of the audience.

In merchandise, this cat's name is Sonia Siberio. It's unknown if her name in the show will be different, or if her character will even be given a name at all.

The Russian blue cat has a male lookalike that appears in The Scratch Tree Society, but they are entirely different characters.

It only becomes clear at the end of the episode that this Russian blue isn't the same cat as the one above. He walks across the screen wearing a baseball cap as a shell, and - in a voice that isn't even slightly similar to the other Russian blue's - shouts, "Look at me, everyone! I'm a turtle."

He is most likely voiced by Richard Ian Cox. During The Scratch Tree Society's credits, Cox is credited as voicing a character just called "Cat." 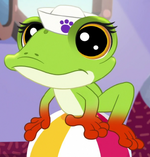 The frog (voiced by Travis Turner) appears in The Purr-fect Storm, and is a member of the LPS Cruise Ship crew.

The pet on the loudspeaker (voiced by Tabitha St. Germain), while not visible on-screen, welcomes everyone to the Paw-Tucket Crystal Con as Jade walks in with a disguise.

The posh cat (voiced by Lili Beaudoin) tells Jade that the Polar Amethyst is the prize in the Big Trivia Contest at the Crystal Con. She accepts Jade's offer to help her win the contest by quizzing her on her knowledge of crystals, but Jade gives up and borrows her crystal hat. 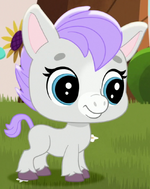 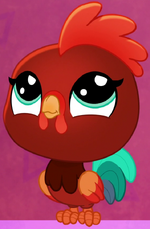 The rooster (voiced by Andrew Francis) is one of the judges seen during Manny and Trip's presentations on Pet-Centricity. 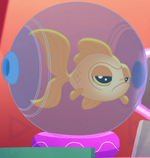 The grumpy goldfish (voiced by Terry Klassen) is another one of the judges on Pet-Centicity.

Trip's cousins are unvoiced, and are seen carrying Trip as he talks to Wisteria.

Retrieved from "https://lpsawoo.fandom.com/wiki/Unnamed_Characters?oldid=5129"
Community content is available under CC-BY-SA unless otherwise noted.