Her and Roxie's apartment

Sleeping and being lazy and relaxed
Comforting her friends

Anyone who annoys her and causing trouble for others

Petula and her posse

Jade Catkin is a female Bombay cat and one of the main characters of Littlest Pet Shop: A World of Our Own. She shares an apartment with Roxie McTerrier.

She is voiced by Ingrid Nilson.

Jade and Roxie live on the same street back in the human world, which causes them to go back and forth with each other.[3]

Jade is sarcastic and can be a bit smug at times. She is a blunt realist, but sometimes comes off as negative and pessimistic instead. She prefers to be honest about matters which annoy her, but is not heartless when it comes to the experiences of others.

Jade is prone to hiding parts of her which don't match her detached persona, like swimming, her loving attachment to Tick-Tock, and especially popular trends such as crystal collecting. She isn't too interested in expanding her social circle, but she cares deeply about the friends she has made.

Jade seems to secretly be good with children, but it isn't something she talks much about. She doesn't seem to put effort into "hiding" this the way she hides other parts of her.

Jade has all black fur, which may appear more or less brown depending on the lighting. Her eyes are a light green, and are often half-closed to express her tired 'cattitude'.

Jade is Roxie's roommate, which often pushes her to her limit. Roxie is optimistic, which Jade will happily accommodate, and bombastic, which Jade struggles to accept on various occasions. Their different lifestyles, and presumptions, leads to the conflicts of many episodes.

Roxie finds herself learning Jade's insecurities, such as not being able to land on all four feet,[4] and goes to extreme lengths to protect her secret.

She remarks that Roxie "makes her feel loved" in the conclusion to Let It Go (Not the Hit Song).

Jade, despite not being trusting him at first, warms up to Scoot after hearing of his means of getting into Paw-Tucket. She's empathetic to the experience of an atypical pet finding refuge in the wonders of Paw-Tucket.

In Pet Side Story, Jade played a large role in encouraging Carmilla to get up on stage and perform. Even before she directly supported Carmilla's acting, Jade was immediately interested in her because she's a bat, and bats are "spooky pets," which Jade likes.

In Big Sis, Lil Pup, Roxie is assigned to be Mabel's "big sister." For much of the episode, though, Jade is actually the one who spends more time mentoring and teaching Mabel. She happily answers Mabel's questions, takes her to do fun activities, and teaches her some "cat" behaviors like sharpening claws and batting toys around. Even after Roxie makes amends with Mabel, Jade continues to hang around with both of them. 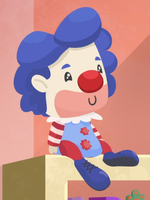 Tick-Tock is the first toy Jade's owner gave her and is the focus of Let It Go (Not the Hit Song). In Jade's panic, she lets it slip that he could "make any lonely cat feel loved," and shows her soft spot for treasured objects and her owner. Jade is very surprised after finding out the troubles Roxie went through to find Tick-Tock. However, when a kitten picks him up and happily trots off, she hears the kitten telling their mother how excited they are to have their first ever toy. Jade then decides that it would be better for the kitten to keep Tick-Tock, and doesn't mention him again afterwards.

Retrieved from "https://lpsawoo.fandom.com/wiki/Jade_Catkin?oldid=5820"
Community content is available under CC-BY-SA unless otherwise noted.